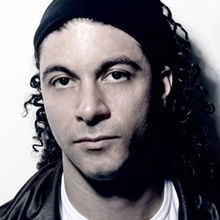 London-born Alex Paschali has lived and breathed music for 20 years now, starting out as a prodigious teenage guitarist for several rock and blues bands on Cyprus’ lively club circuit before returning to London in 1997 to fully expand his horizons. Alex studied sound engineering and music technology at the Islington Music Workshop and City of Westminster College, which would lead to more head-turning gigs, bedroom song-writing and the co-running of Barnet’s prestigious Earthworks studio.

Earthworks changed everything. Alex worked for a wide range of clients there on cut-through productions ranging from rock and pop to garage and house music, via blues and classical. It was the perfect base from which to turbo-charge his sonic passion, hone his creativity and massively broaden his musical repertoire. Earthworks was also where Alex would meet fellow studio engineer Leigh Darlow (the facility’s current owner) in 2001, the pair forming legendary soul-house partnership The Layabouts.

Alex continues to work alongside Leigh today, the duo’s common soulful ground extending a fine discography synonymous with both punch and pedigree. The Layabouts have worked with some of dance music’s biggest heroes, including New York’s Grammy-nominated titan Kenny ‘Dope’ Gonzalez, as well as established singers Kathy Brown, Imaani, Portia Monique, Shea Soul, Terri Walker, Omar and Tony Momrelle, not to mention the Reel People Music family. Their music has been lauded by a broad spectrum of national media including national BBC radio (where Alex’s solo session work has also featured); has prompted the inception of two record labels, and inspired huge tours of South Africa including the country’s prestigious Spring Fiesta.

Impressively, too, The Layabouts have grown in tandem with Alex’s ambitions as a teacher to others. Alex started teaching the guitar in 2000, funding his own studies during those tight times before full-scale career success beckoned whilst scratching a perpetual itch to share the joy of music with others. A fun, non-classical approach to tutelage saw his class sizes rocket in next to no time – within a year his classroom was totally booked.

It couldn’t, and didn’t, stop there; the enquiries for lessons were still coming. In 2003 the Al Pascal Music School appointed its first new teacher and others were soon to follow that. Currently, Alex’s school boasts 16 talented teachers and 270 dedicated students (aged from 7 to 60) across the mediums of guitar, bass, drums, piano and vocal. The school is co-ordinated from Earthworks but operates all over North London, driven by Alex’s original, inspiring commitment to combine the fun of learning a new instrument with solid goals and qualifications. To date, the school’s pass rate for grade exams is a whopping 98%.

In turn, the school now proudly hosts regular student concerts, fundraisers and even local festival stages. Since the first ‘event’ in 2009, Alex and his students have made themselves a popular fixture at the sizeable East Barnet Festival, raised thousands of pounds via gigs for Teenage Cancer Trust and kick-started an amazing summer camp in the expansive surrounds of a historic Suffolk manor house – all of these exciting school activities allow students to learn and play alongside seasoned session musicians, boosting their confidence and experience.

Most recently, Alex has introduced workshops to Hertfordshire’s high-performing academy school Mount Grace and, looking ahead, is keen to develop firm ties with other local schools. For now, though, he has enough musical goodness on his plate – juggling current educative successes with fresh songwriting for The Layabouts and work on his own exciting solo project, as yet untitled.

“I love so many different forms of music” Alex reflects. “I think that embracing all of them has spurred me on and propelled me to where I am today. I love sharing good music, whether it’s by a release or the classroom. It’s a huge, huge passion.”

#tbt Randomly came across these photos so I thoug

Recharging the batteries with this one….. Got a