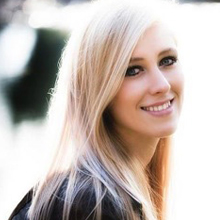 Claudia is a graduate Masters of Music Scholar from the Guildhall School of Music and Drama and graduated with a BMus (Hons) from GSMD in 2010. She started out training in Pop, Jazz and Musical Theatre singing, studying at Italia Conti, Laine Theatre Arts and Guildford School of Acting. She was taken under the instruction of Sir Andrew Lloyd Webber and recorded an album and a year later was successful in the hit TV show, Pop Idol Series 2 in 2003. She has sung in many venues, including the Royal Festival Hall, Sadlers Wells,Royal Albert Hall and the Barbican, and in concerts and festivals around the UK and the World, raising money primarily for ‘The Children’s Trust’ and ‘The Stroke Assocation’. She had the privilege to tour around Italy in the opera Mascagni’s ‘Cavalleria Rusticana’ and she won 1st Prize of The Worshipful Company of Chartered Surveyors Ensemble Prize. Recently, Claudia sang her debut at Wigmore Hall and was the principal soprano for The Witt Opera Studio.

As well as performing, Claudia has taught Singing, Piano, Music Theory and Acting for many years and has become very successful in schools in London, Hertfordshire and the South West. She has been the Head of Singing at ‘Al Pascal School of Music’ Barnet since 2009, a principal singing teacher at ‘Wimbledon High School, GDST in South-West London since 2010 and has private students in and around London. She teaches all abilities ranging from beginners to advanced and teaches everything from Pop and Rock to Musical Theatre, to Jazz, to Classical. Claudia teaches the ABRSM, Trinity Guildhall and LCM syllables for singing, theory and piano exams. Her students are actively involved in productions, concerts, ‘The Voice’ and ‘X Factor’ auditions and have been very successful in London Drama and Music school auditions and in Oxbridge Choral Scholarships.

She has also led various acting and music workshops for children and teenagers of all ages, at international and national summer schools/camps; More recently, in Tower Hamlets and Hackney primary schools and University College Hospital, London. Claudia loves to organise concerts for her students and has invited some of top students to perform alongside her at top London venues.

Special day today so I thought I’d upload my pi

More great talent to join us at #eastbarnetfestiva